Internet safety – how to secure your computer from hacking 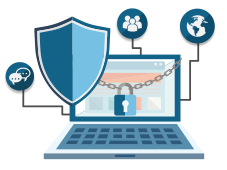 In case you think only those who store corporate or any other important data on their hard drive should fear hacker attacks, we have to disillusion you. Internet safety is an urgent problem for ordinary users as well, especially when surfing the Internet is one of your favorite activities and you do not want your computer to be hacked. You can contract a Trojan in the most unanticipated places like downloading video or music, via email or social networks, launching a video game or even installing quite simple software. You can protect your computer from hacking in a variety of ways starting with usual antivirus software and firewall and finishing with installing a proxy server and Tor. It would be even better to combine different services and software.

In our article, we will both tell you about the main sources of danger on the Internet and offer a list of solutions to protect your computer from viruses and unauthorized access. Dedicated experts and advanced users will most likely learn nothing new from it. This information may be considered to be the ABC of computer safety. Our article will be primarily useful for people who underestimate such issues. Unfortunately, negligent attitude toward data protection is quite a usual behavior model nowadays.

Why would attackers need your computer?

Every now and then, stories about stolen millions, attacks on government and banking institutions around the world appear in news media. Hackers become heroes of TV shows, films, and video games. Some take them like geeks and anarchists, others like modern day “Robin Hoods”. In fact, the reality is quite different from spy movies storylines: cybercriminals often damage networks and servers for the sake of a tangible financial reward. Some pay for hacking their competitors, block their servers, discredit or shake their businesses in every possible way. At times, the extent of such activities is rather impressive, and even large companies and public figures become victims of cybercriminals.

By no means ordinary users can relax ignoring even the basic principles of computer safety. Cybercriminals have long widened their circle of interests, and nowadays, they do not just steal valuable data but often hack ordinary home or work computers. Typically, attackers pursue one of the following objectives:

- extortion of money from computer owners (malicious software blocks key system functions demanding money transfers to the specified account for a promise to unblock the system);

- stealing accounts from users of popular online games (for subsequent resale or other criminal schemes).

We can subdivide all these threats into two categories: hacking the computer secretly for later use of which users are unaware and ordinary theft of virtual or tangible values. You may be well surprised to know how many sophisticated schemes have been invented to misuse your accounts, e-mail address, or Internet channel. In this case, hackers pursue a single goal – to divert suspicion away from themselves. That is why they are ready to spend some time hacking your PC. Provided your computer safety is weak, little effort will be necessary to do it.

To cause some damage, malicious software has to find way into your computer in the first place. Trojan software is the most common way. It disguises itself as some common files or archives, and various libraries and service documents of practically any software you download can contain it. Sometimes it is quite easy to identify such disguised files: you download a folder, an archive, some video or music file from a website but the file format is clearly wrong. Look at the extension: if this is an executable file with .exe extension but it should be .rar, .7z or .mp3, you obviously face an attempt to cheat you. This is the simplest way of virus infection. A much more dangerous way is Trojans and other malware distribution via email, hacked applications and games, torrent trackers and social networks. Even a link to some dubious landing page or clicking on a teaser ad can be fatal. Good antivirus software is able to protect your computer, and proxy or anonymizing services will make things more difficult for hackers significantly reducing hacking chances. Let us have a closer look at some means and ways of internet safety.

Ways of protection against hacking

Your careful and cautious way to surf the Internet is the key element. Even the best computer protection software will not help if you click and download files mindlessly.

Why it is worth updating the operating system regularly

With each new version, Windows built-in security system is getting better. Never ignore updates to the operating system and its components including your browser, firewall, system files, and libraries. Such a security tool cannot be considered the main one but the most recent OS version helps other services and software work more efficiently.

Attackers can gain control over the user’s PC even without their participation and many users do not even realize it. The Internet connection is a bidirectional channel, so it is important to block all kinds of access to your computer excluding service and protected access. The best way is to contact a system administrator: the procedure will take just a couple of minutes.

IMPORTANT – make sure you have installed good antivirus software

Antivirus software should always be enabled, all libraries should be updated to the most recent version, and preventive diagnostics should be performed no less than once a month. You may take it as an axiom requiring no proofs, and never listen to those who say that such software causes performance loss.

Advantages of working through an anonymous proxy server

Proxy is a special server which works as an intermediary when you use the Internet. It provides computer protection and confidentiality via security add-ons without reducing access speed to the network if you specify your geolocation the right way. In some cases, it even improves communication quality. A proxy server hosting is a popular solution among common users and commercial companies.

VPN – encrypted channels utilization for working on the Internet

Virtual Private Network is a special method of accessing the Web. Using sophisticated algorithms, special software creates a complicated network of nodes encrypting traffic at the same time. As a result, no one can pinpoint the computer’s location, or learn the clickstream or any other information about any user. To be more precise, it makes the hacking procedure so laborious and time-consuming that no hacker would ever want to commence it.

- the proxy can be used for personal purposes only

- using the proxy for illegal purposes is forbidden

- passing the proxy over to third parties is not allowed

- we compensate for idle work