Where the proxies come from 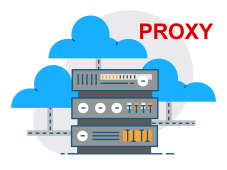 Proxy is an ordinary computer program that runs on the devices that are connected to the Internet. At the same time, both an ordinary PC and the most powerful server that is located in the data center of a large-scale hosting company, can act as a computer. Such unpretentiousness is noted because the proxy can occur for different reasons. It does not make sense to scrutinize all possible options for the appearance of these programs. It is enough to get acquainted only with the most common among them. First of all, we need to understand the differences between white and black proxies.

The owners of such versions pursue only one goal, to use hardware as a proxy. That is, there are no “pitfalls”, anything hidden, not clarified. Everything is as clear and transparent as possible. In fact, due to such characteristics proxies received their name.

Access to these versions can be opened both for all users or only for certain persons. The main feature of white proxies is that the computer is used legitimately. Usually, various limitations are provided. For example, they are associated with access to the IP-address. Although numerous traps, allowing attackers to steal information and use it for illegal purposes, are very common. As a result, today the client can purchase allegedly “white” proxy, and after a few days such version, most likely, will not differ from the “black” versions.

Such programs are slightly different from the previous ones. First, we should highlight the point that the owners of used computers cannot monitor the current state of affairs. That is, they actually were not asked whether they agree on the fact that the computer was used as a proxy or not. Often, here we are talking about attacks of violators. Professional hackers introduce harmful computer virus; after which it can be converted into a proxy. Such software can operate for a long time. But, at the same time, it cannot be called stable, because during the day the user from time to time switches the computer off and on.

There are also “scan” versions. We are talking about those proxies, which are considered accessible to all users without exception. They are found quite simply – by scanning the servers on the World Wide Web. It should be said, that the vast majority of proxies can be detected by this method. In fact, the person is only required to spend a certain amount of time trying to constantly change the ranges of IP-addresses. As a result, it will be possible to find servers that are completely open, with no outside help.

This method can be used by users for various purposes. For example, some people sell found proxies to users who do not have the desire or the time to carry out such searches by themselves. For others, it is a great opportunity to gain some control over servers and exploit them for their own purposes.

The essence of this method is that the list of proxies may consist of both “white” and “black” versions. Proxies may prove to be both sufficiently effective and multipurpose, and those that will survive only a few days. Although, in fairness it should be noted that most of the servers, obtained in such way, are not notable for any stability and you should not set great hopes on them not to be disappointed too soon.

- the proxy can be used for personal purposes only

- using the proxy for illegal purposes is forbidden

- passing the proxy over to third parties is not allowed

- we compensate for idle work